”To get the right word in the right place is a rare achievement. To condense the diffused light of a page of thought into the luminous flash of a single sentence, is worthy to rank as a prize composition just by itself... Anybody can have ideas--the difficulty is to express them without squandering a quire of paper on an idea that ought to be reduced to one glittering paragraph.” 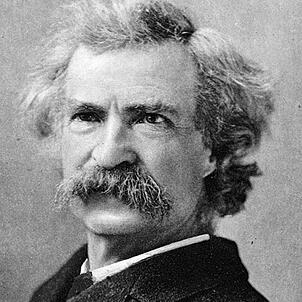 Born November 30, 1835, Samuel Langhorne Clemens (pen name, Mark Twain) would become one of the most beloved American writers of all time. His works are perennial favorites among readers and collectors, and in recent years rare Mark Twain books and ephemera have gained even more value.

The sixth child of Jane and John Clemens, Twain passed his childhood in Hannibal, MO. The town was located on the bank of the Mississippi River, and steam boats often stopped there. When Twain was 12, his father died of pneumonia. Twain had to leave school to work, and he found a position as a printer's apprentice. Two years later, he found himself an editorial assistant and printer at the Orion newspaper, where his older brother also worked. >>Read more.

Scrawled in the Margins: Signs of Twain as a Critic

By the end of his life, Samuel Langhorne Clemens had achieved fame as a steamboat pilot on the Mississippi, a globe-trotting lecturer and, of course, the literary genius who wrote Adventures of Huckleberry Finn and other works under the name Mark Twain. 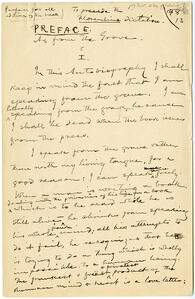 He was less well-known, but equally talented, as a literary critic. Proof of it has resided, mostly unnoticed, in a small library in Redding, Conn., where hundreds of his personal books have sat in obscurity for 100 years. They are filled with notes in his own cramped, scratchy handwriting. Irrepressible when he spotted something he did not like, but also impatient with good books that he thought could be better, he was often savage in his commentary.

"The English of this book is incorrect & slovenly & its diction, as a rule, barren of distinction," Twain scribbled in his copy of a 1906 autobiography of Lew Wallace, the Civil War general who wrote Ben-Hur.

Now, for the first time, this little-known side of Twain's life, plumbed occasionally by scholars, can finally be appreciated by his fans. In honor of the centennial of his death on April 21, the library granted The New York Times permission to examine this trove of books and record notes and markings Twain left behind in their margins. >> Read more.

Mark Twain enjoys a reputation as one of America's legendary writers, and the value of rare books by Twain have appreciated in value accordingly. Meanwhile, he's one of the more accessible 19th-century authors to collect because his books were published in larger numbers than those of contemporaries like Melville and Thoreau.

Mark Twain books were first considered "collectible" in 1885, when New York rare book dealers Leon & Brothers issued a catalogue exclusively devoted to American authors. Thirteen of Twain's first editions were included.  By 1893, Twain was continually inundated with requests for autographs and realized his own celebrity. He asked his English publisher to produce a limited edition of his poetry, but his agent declined; at the time, Twain was not known as a poet.  >> Read more.

The "BAL", the indispensable reference set for the student of American literature in nine volumes, Clemens is covered extensively in volume 2.

William M. McBride--Mark Twain: A Bibliography of the Collections of the Mark Twain Memorial and the Stowe-Day Foundation

William McBride's indispensable work, covering the full breadth of Mark Twain's writings after Merle Johnson's first Twain bibliography in 1910 and the entries in Jacob Blanck's Bibliography of American Literature in 1957

A New View of Mark Twain 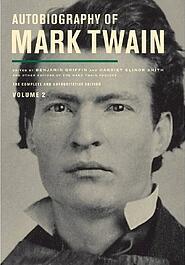 Although previous versions of Twain's autobiography have been published in the past, this edition is the first to present Twain's own words, uncensored, in the manner he intended.

In November 2010, one hundred years after Twain's death, the University of California Press released the first volume of The Autobiography of Mark Twain. It was the first time that Twain's autobiography was presented in its entirety, in the manner that Twain dictated it to stenographers during his lifetime. The volume was wildly popular, spending several weeks at the top of the New York Times bestseller list. >> Read more. 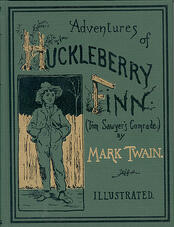 It is a curious incongruity that Mark Twain’s Adventures of Huckleberry Finn  - widely considered one of the great American novels -  was first published in Great Britain. Released stateside in February 1885, the book has remained in constant state of controversy ever since. Immediately after its publication, many libraries banned the book, deeming it unnecessarily crude and vulgar.

Twain responded to his editor, “Apparently, the Concord library has condemned Huck as 'trash and only suitable for the slums.' This will sell us another twenty-five thousand copies for sure!"

More recently, Adventures of Huckleberry Finn has been criticized for its perceived use of racial stereotypes and its persistent use of the word “nigger.” While most agree that Twain intended the book as an attack on racism, others argue that Twain failed to rise above racial paradigms of the time. According to the American Library Association, Adventures of Huckleberry Finn was the fifth most challenged book in 2007, the reason cited was “racism.” >>Read more.

The final word on Huckleberry Finn has yet to be spoken. In recent years, a long-lost manuscript was discovered among the belongings of a deceased woman living in upstate New York. This early version of the novel includes scenes that were edited out of today’s copies, along with copious amounts of notes in the margins in Twain’s own handwriting.

Diving into these “new” additions of Huckleberry’s adventures provides plenty of fodder for discussion and debate among readers. These aren’t just minor edits in word choice or sentence structure – large chunks of the novel were removed before publication. One of the most significant edits includes the removal of 54 pages detailing a fight scene on the raft.  >> Read more. 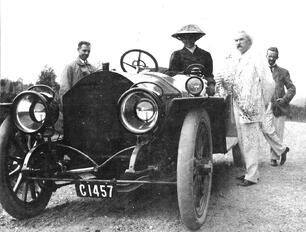 As far as author personalities go, those that are so big they threaten to eclipse one's work, Mark Twain is one of the USA's most eminent. He penetrated the most unlikely of social circles and made the most surprising acquaintances. It was as if he had a sense for epicenters of advancement and progress. His interest in technology and invention (he died having three patents to his name) brought him into meetings with Nikola Tesla and Thomas Edison. Through his wife, he became surrounded by figures of the abolitionist movement such as Harriet Beecher Stowe and Frederick Douglass. Not only was he an abolitionist, Twain was vice president of the American Anti-Imperialist League and was a staunch advocate for women's suffrage. He delivered the famous "Votes for Women" speech on the matter.  >> Read more.