"An immense gift for using words, an amazing curiosity and power of observation with his mind and with all his senses, the mask of the entertainer, and beyond that a queer gift of second sight, of transmitting messages from elsewhere, a gift so disconcerting when we are made aware of it that thenceforth we are never sure when it is not present: all this makes Kipling a writer impossible wholly to understand and quite impossible to belittle." 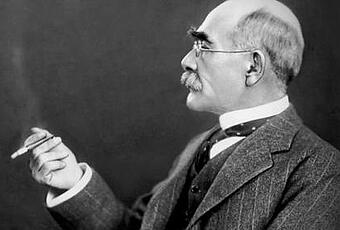 Born to Victorian parents who named him after Staffordshire's Rudyard Lake, Kipling split his boyhood between the markets of Bombay India and an abusive English foster home.

His life of travel and tragedy led to two near nervous breakdowns, but made his creative work accessible to both the aristocracy and the common man.

Entranced by the natural world and accustomed to solitude, Kipling was driven by a powerful imagination. From the age of 16, he worked as a journalist, travel writer, and author. He published his first collection of poems when he was 21 and within a few years became a celebrity whose influence spanned three continents. >> Read more.

Rudyard Kipling's diverse literary contributions and status as a legendary author have made him a prime subject for collectors of rare books. Undoubtedly the most famous Kipling collection was that of David Alan Richards, a New York real estate attorney. His Kipling collection, the largest in the world, contained 82% of all first editions by Kipling and was valued at $1.5 million.

Richards discovered Kipling thanks to his parents. He opened a card from them on his 21st birthday and found the words to Kipling's poem "If."

At the time, Kipling wasn't favored among academic or collectors, but rather dismissed as a racist and an imperialist. But the tides of criticism have since turned in Kipling's favor, and he's again found a broad audience among rare book collectors.

Richards' own interest in collecting Kipling hasn't waned, even though he's donated his collection to Yale University. Even during the five-year donation process, Richards managed to pick up a few exceptional items. One of these was the first American edition of The Second Jungle Book, which has the earliest Kipling dust jacket. It's the only known copy to exist in that condition.

Richards explores the joys and challenges of collecting Kipling in Rudyard Kipling: The Books I Leave Behind (2007), a work that's certainly mandatory reading for an Kipling enthusiast. He also published a bibliography of Kipling's works in 2010, through Oak Knoll Press.

It's become an indispensable reference for collectors of Rudyard Kipling, similarly to the previously published Flora V Livingston's bibliography. 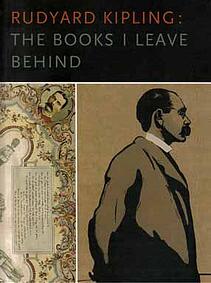 David Alan Richards: Rudyard Kipling: A Bibliography
Richards' ultimate account of the Nobel Prize winner’s works describing 480 first editions, authorized and unauthorized, appearing as books, pamphlets, leaflets, and broadsides from 1881 through 2008--including a dozen titles not noted by prior bibliographers. This work also includes 127 titles of books with contributions from Kipling, 17 titles containing prefaces, introductory letters and forewords by Kipling, and 123 titles printing his private letters. 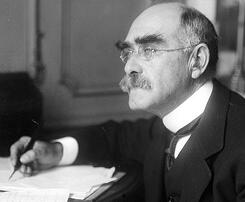 A rare first edition of The Jungle Book by Rudyard Kipling, including a poignant handwritten note from the author to his young daughter, has been discovered. The book was found by librarians at the National Trust's Wimpole Hall in Cambridgeshire, where Kipling's eldest daughter, Elsie, lived. The author wrote the inscription to his daughter Josephine, who died in 1899 aged six, said Trust officials.

The book is on display at Wimpole Hall, where Elsie lived from 1938 to 1976. The inscription reads: "This book belongs to Josephine Kipling for whom it was written by her father, May 1894." Kipling did not sign the inscription, but based on many other items in the Kipling archive, the handwriting is believed to be his. Read more.

Rudyard Kipling loved golf so much, he's credited with creating snow golf so that he could play through the frigid Vermont winters. Kipling would paint his golf balls red and sink a tin can into the snow, eliminating two of the primary challenges of playing in the snow. When Sir Arthur Conan Doyle visited Kipling in Vermont, the two legendary authors played a round of golf together. 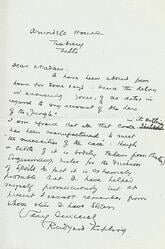 Recently, Rudyard Kipling--or rather his letter--made the news. It seems that Kipling may have borrowed rather generously from other sources when he wrote parts of his classic The Jungle Book. He makes the confession in a letter to an unknown correspondent, who had apparently inquired about "The Law of the Jungle."

Kipling states in the 1895 letter, "It is extremely possible that I have helped myself promiscuously but at present I cannot remember from whose stories I have stolen." Regarding the laws of the jungle, Kipling says "I am afraid that all that code in its outline has been manufactured to 'meet the necessities of the case': though a little of it is taken from (Southern) Esquimaux rules for the division of spoils." Read more.